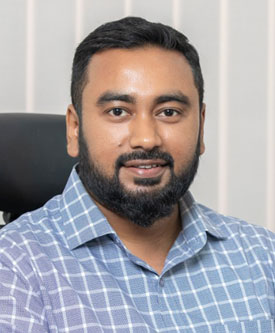 The centrality of project management in a world past the Global Financial Crisis of 2008 notwithstanding, Mr. Istiak’s prior exposures to marketing management, especially in products/services planning and promotion, prepared him admirably.

For more than a decade, his skills shone on entities like Sean Publications, B & F Dhaka Limited, Islamic Online University, Blooming Sun International School, and Lakehead Grammar School. The roles he played or the management positions he held were all prominent; his peers felt honored to work with him.

He harbors an inexhaustible sense of deontological ethicality, going beyond what is expected is part of his personality, and he lends himself to charitable causes without second thought.

Perhaps that is why he feels especially privileged to attend to RM Foundation projects which are done out of corporate social responsibility and/or to introduce social innovations. From scaling up the ventures of women entrepreneurs to organizing community workshops for systemic diagramming of complex, local issues, with the intent of bridging divides, Mr. Istiak savors the opportunities.

One of the most distinguishing aspect of his leadership, in his current role, is his conflict management and/or negotiating skills. The coordination of physical and monetary resources is best punctuated by motivating the workforce – Mr. Istiak excels in people skills. In essence, he inculcates a shared understanding of destiny, so to speak, and monitoring-control becomes secondary. RM Group appreciates the depth of his worldview, indeed.

Mr. Istiak is an avid gamer and likes travelling, watching movies, and listening to podcasts.